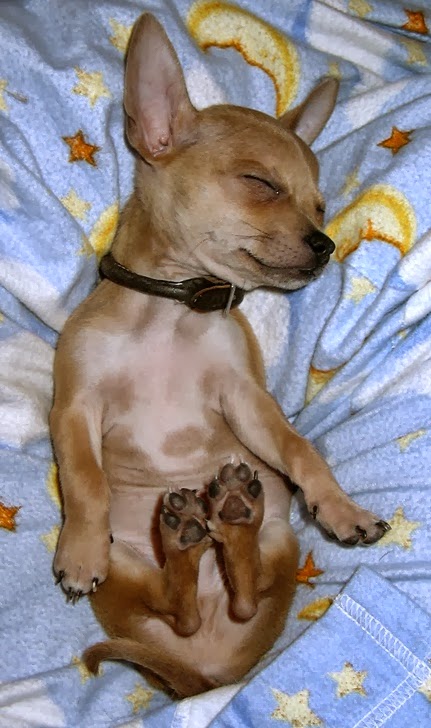 Chihuahua is generally a healthy dog breed and also has a quite good and long lifespan that lasts for almost 15-20 years.However every dog breed has tendency to develop some genetic health issues while others can be due to unhygienic conditions or carelessness of the owner.Here are some diseases explained below your Chihuahua might suffer from.

PATELLA LUXATION:
This is a disease often associated with Chihuahua as they have tendency to develop such a condition more than many other dog breeds.Hind legs are mostly affected and there is also possibility for one leg being more affected than the other.The disease is more common in toy breeds.This is a bone disorder present in knee also called trick knee.In this disease the small triangular bone called patella which normally protects the knee joints is displaced from it's original position.The ligaments present in knee joint become unable to perform their function and as a result a dog can not walk normally.This condition is quiet painful for a dog and needs surgery in severe cases.It can be cured by surgery.However resting can also help in relieving pain.
HYPOGLYCEMIA:
Hypoglycemia is a disease that occurs due to low sugar level in blood.The disease usually appears in puppyhood and continues throughout their life.The disease gradually makes the muscles weak.This makes your Chihuahua dull and in severe cases can be a cause of premature death.Any kind of unsuitable environment for example,traveling for a long time can cause Hypoglycemia.Reducing daily exercise and necessary activities can also be a cause of this disease.In order to save your dog from such a disease try to feed high quality food with proper nutrients.Food having high carbohydrate would be a good choice to feed.Try to feed at specific times atleast three times a day.Try to make a proper routine and diet plan for your dog for which you can get recommendation from a veterinary specialist.

HYDROCEPHALUS:
This is a brain disorder and mostly affects the small sized dog breeds like Yorkshire Terrier and Chihuahua.In other words this disease is called "Water on the Brain".This disease appears due to the excessive release of Cerebrospinal Fluid in brain.The fluid is necessary but dogs suffering from the disease have too much fluid filled in the ventricles.The disease usually appears in the first years of dog's life.Too much fluid cause swelling of the ventricles that badly affects brain functions.Disease normally affects one part of the brain but in worse cases can affect both sides of dog's brain.Hydrocephalus appears usually appears in two form one the more dangerous one is compensatory which causes severe brain damage.The less dangerous one is obstructive.Both of them can be congenital.

MOUTH INFECTIONS:
Chihuahuas have small mouth and also very small teeth that are not easy to clean.This can cause the plaque to stay in their mouth and can be a cause for several mouth infections.Try to check teeth regularly and also try to keep them clean to prevent any such condition.
Click to see How to Clean Chihuahua Teeth
EYE PROBLEMS:
Chihuahuas have big round and shiny eyes that enhance their beauty.But this big eyes can also cause them some problems as they are prone to many eye infections.Some of them are as follows.

PROGRESSIVE RETINAL ATROPHY:
It is an inherited disorder of the retina of the eye usually given resemblance to film used in camera.This disease does not occur at a specific age and   the dog suffering from this does not feel any pain.However the disease usually occurs in both of the eyes and gradually makes the dog completely blind.Almost all dog breeds has been seen suffering from this disease.
DIAGNOSIS:

considerable increase in the shine of eye.Partial vision loss.Difficulty to recognize things specially at night.
GLAUCOMA:
This disease is caused by increased eye pressure.This can be painful and can cause blindness if are not treated surgically.Eye releases a transparent fluid called "Aqueous humor" that has several functions including maintaining the eye shape.In Glaucoma the fluid discharges more than it's needed that cause the eye pressure to be increased.The symptoms includes redness in eyes,dislocation of the eye ball and also bulky and unclear eyes.
Image Source:followpics

Labels: Chihuahua, Dogs
Email ThisBlogThis!Share to TwitterShare to Facebook
at 13:14