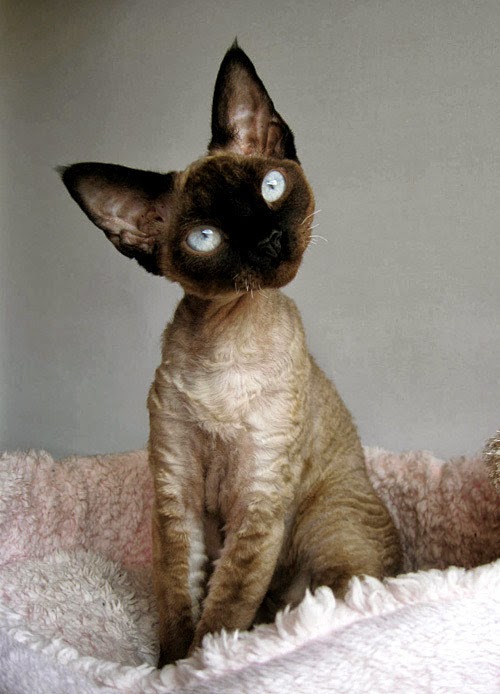 Cornish Rex Cats have their origin in England,United Kingdom.These cats were originated almost a decade before Devon Rex appeared in Devonshire.Along with all their similarities there history also carries a number of similarities.This time the region was the grassy land of Cornwall.Exactly the north east part of Cornwall called Bodmin Moor.The owner was Mrs Nina Ennismore who had a cat named Serena.Serena gave birth to 5 kittens along them one was black and cream kitten having a curly coat.Mrs Nina new the kitten was special among all his litter mates and that's the reason he was further bred to his mother on the suggestion of the genetics expert she consulted with.That breeding produced another litter but this time two curly coated kittens were produced out of which one survived.Almost one decade those cats didn't spread because the owner was waiting to be confirmed that she had come up with a cat with some distinct qualities and features.Later these cats were bred with several domestic and other cat breeds to improve the quality.These cats are now known by Cornish Rex cats and are considered to be one of the most loved cat breed.Cornish Rex cats were first introduced in United States in early 1960.Cornish Rex were first registered by CFA in 1962.

SIZE AND WEIGHT:
Cornish Rex is a medium sized curly haired cat breed with an unusual unique appearance.They have large ears that acts as a mild stone in their unique appearance.They are very similar to Devon Rex cats but have some differences in their coats,heads and body shapes.
A healthy Cornish Rex male normally weighs around 8-10 lbs or 3.6-4.5 kg whereas a healthy female weighs around 6-8 lbs or 2.7-3.6 kg.
An adult Cornish Rex cat would have a height range between 11-15 inches or 28-38 cm.
Image Source:hell-kitten