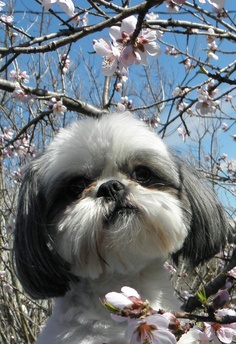 Shih Tzu is considered as one of the oldest dog breed originated in Asia and one of the most famous dog breed now a days.Every breed carries some health concerns some of them are genetic some occur due to excessive and careless breeding.However by knowing to which diseases your dog is prone you can save him from many diseases that would lead in his better and healthy life.Here are some disease Shih Tzu dogs are prone to.

HIP DYSPLASIA:
This is an inherited disease most of the dog breeds suffer from.Shih Tzu are also prone to Hip Dysplasia.This is a hip joint disorder and mostly occur in dogs in the form of Canine Hip Dysplasia.Actually a hip joint has two main components a ball and a socket.In this disease the ball and socket in the hip joint does not fit together as a result are no longer able to bear the pressure and cause massive friction in joints.This disease usually appears in the early age of a dog's life.It can badly affect the physical activity of your dog and would gradually make it too weak.

ENTROPION:
This is also an eyelid disorder.This is a genetic disorder that makes the eyelids to move inward.Eyelids rubbing over the surface of eye produces friction,excessive tearing and also makes the dog to scratch eyes.In severe cases it can cause retinal ulcers and as a result loss of vision.

EPITHELIAL CORNEAL DYSTROPHY:
This type of Corneal Dystrophy affects the outermost layer of cornea called Epithelium.This layer normally acts as a shield for cornea and protects it from eye infection.It also acts as vision clearer that is why dogs affected by Epithelial Corneal Dystrophy starts losing their vision power gradually.

ENDOTHELIAL CORNEAL DYSTROPHY:
This type of Corneal Dystrophy affects the innermost layer of cornea that is thin and sensitive.This layer actually works to maintain the significant amount water in storma.Dogs suffering from this disorder mostly losses their vision completely and the chances of recovery from this condition are almost zero.

HEAT STROKE:
Shih Tzu are dogs have small muzzled face that causes several breathing disorders and also make prone to heat stroke.This can cause sudden death during high activity times.Their small nostrils do not provide enough space for the air to pass to fulfill body's oxygen requirement during high activity times that causes body temperature to rise and as a result the dog suffers from heat stroke.One should keep enough water and other equipment to keep his dog cool and exercise should be done in smaller sessions in order to prevent over heating.

LUXATING PATELLA:
This disease is more common in toy breeds.This is a bone disorder present in knee also called trick knee.In this disease the small triangular bone called patella which normally protects the knee joints is displaced from it's original position.The ligaments present in knee joint become unable to perform their function and as a result a dog can not walk normally.This condition is quiet painful for a dog and needs surgery in severe cases.

HYPOGLYCEMIA:
This is also called Low Blood sugar and affects dogs as well as cats.This is not a life threatening disease but can cause severe damage.In this disease glucose level in body drops which is the source of energy and the result is almost predictable.Low sugar level makes your dog dull and as a result he is unable to perform regular tasks and activities.Stress can cause hypoglycemia,Lethargy,loss of appetite and inability to concentrate are the main symptoms of Hypoglycemia.
Image Source:pinterest