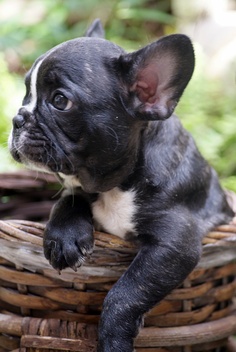 From one side French Bulldogs are surely easy to handle as they need less grooming and less exercise.On the other hand it becomes hard for those who own these small Bulldogs because of them being prone to many diseases.Almost all Bulldog type dogs have been seen prone to many diseases because of their body shape while others are genetic.French Bulldogs also have tendency to develop many such diseases and are so difficult to maintain.Some diseases appear in puppyhood while others in late ages.By knowing such diseases your dog might be prone to you can certainly prevent a bigger damage.Here are some diseases explained that have been seen common in French Bulldogs.

OBESITY:
French Bulldogs are from Non-Sporting group but they do need sufficient amount of exercise that is not usually provided them by their owners.They are often kept in small apartments that are not enough to fulfill the level of activity they need.Obesity is a root of many other health problems and leads to many fatal diseases.One must be sure that he is providing his French Bulldog with enough space and exercise time that he needs to prevent Obesity.

HEAT STROKE:
French Bulldogs have small muzzled face that causes several breathing disorders and also make them prone to heat stroke.This can cause sudden death during high activity times.Their small nostrils do not provide enough space for the air to pass to fulfill body's oxygen requirement during high activity times that causes body temperature to rise and as a result the dog suffers from heat stroke.One should keep enough water and other equipment to keep his dog cool and exercise should be done in smaller sessions in order to prevent over heating.

HIP DYSPLASIA:
This is an inherited disease most of the dog breeds suffer from.Yorkshire Terriers are also prone to Hip Dysplasia.This is a hip joint disorder and mostly occur in dogs in the form of Canine Hip Dysplasia.Actually a hip joint has two main components a ball and a socket.In this disease the ball and socket in the hip joint does not fit together as a result are no longer able to bear the pressure and cause massive friction in joints.This disease usually appears in the early age of a dog's life.It can badly affect the physical activity of your dog and would gradually make it too weak.

ELBOW DYSPLASIA:
This is not very much different from Hip Dysplasia discussed above.Male French Bulldogs have been seen more prone to this disease than female Bulldogs.This disease also appears in the early ages of your puppy almost at the age of four month.This is also a genetic disorder and most of the dogs having this suffer from this disease throughout the whole life.In this disease during the period of bone development the elbows do not develop properly or develops in an abnormal way that later on prevents the right movement of elbow joint.

ELONGATED SOFT PALATE:
As the name shows this disease occurs due to the elongation in soft plate. This disturbs the airway and it becomes difficult for a dog to inhale air easily.Dogs suffering from this disease specially feel disturbance while eating.Common symptoms of this disease are open mouth breathing,excessive production of saliva and snoring.After being diagnosed this disease can be cured by a surgery.

BRACHYCEPHALIC SYNDROME:
This is a breathing disorder that have been seen affecting almost all short nosed dog breeds.This can be said as a collective name of several breathing disorders.It becomes difficult for the dogs to breath suffering from this syndrome and as a result their breathing cycle becomes unable to fulfil their body's oxygen requirement specially at high activity times.Dogs suffering from this diseases can be seen facing difficulty in inhaling and also a specific noise can also be heard near such dogs.

In addition to all above health disorders French Bulldogs have also been seen prone to many skin disorders.Female Bulldogs have been seen facing problems at delivery times.Bulldogs have big heads and it often becomes difficult for them to give normal births and as a result they face
C-Section.
Image Source:bluefrenchies