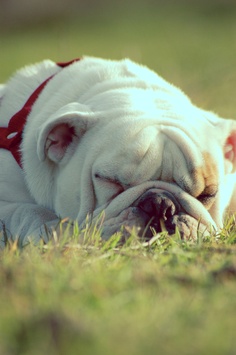 English Bulldogs are prone to many diseases due to their body shapes and some other inherited reasons.Breeders have been working for centuries to make this breed more capable of fighting with the diseases and in other way to elongate their lifespan.By knowing to which diseases your dog may suffer you may diagnose the disease at right time that can prevent a bigger damage to occur.Here are some disease English Bulldogs are prone to.

OBESITY:
Obesity does not look like a disease but it may gives your Bulldog a cutter look but it is actually the mother of many heart and bone diseases that may bring serious harm to your dog.English Bulldogs are from Non-Sporting group.They do not need lots of exercise but still a significant amount of daily exercise is required for normal body development and to keep it in working order.They are often kept in small apartments that are not enough to fulfill their the level of activity they need.Obesity is a root of many other health problems and leads to many fatal diseases.One must be sure that he is providing his Bulldog with the enough space and exercise time that he needs to prevent Obesity.

HIP DYSPLASIA:
This is an inherited disease most of the dog breeds suffer from.Labrador Retrievers are also prone to Hip Dysplasia.This is a hip joint disorder and mostly occur in dogs in the form of Canine Hip Dysplasia.Actually a hip joint has two main components a ball and a socket.In this disease the ball and socket in the hip joint does not fit together as a result are no longer able to bear the pressure and cause massive friction in joints.This disease usually appears in the early age of a dog's life.It can badly affect the physical activity of your dog and would gradually make it too weak.

ELBOW DYSPLASIA:
This is not very much different from Hip Dysplasia discussed above.Male Bulldogs has been seen more prone to this disease than female Bulldogs.This disease also appears in the early ages of your puppy almost at the age of four month.This is also a genetic disorder and most of the dogs having this suffer from this disease throughout the whole life.In this disease during the period of bone development the elbows do not develop properly or develops in an abnormal way that later on prevents the right movement of elbow joint.


LUXATING PATELLA:
This disease is more common in toy breeds.This is a bone disorder present in knee also called trick knee.In this disease the small triangular bone called patella which normally protects the knee joints is displaced from it's original position.The ligaments present in knee joint become unable to perform their function and as a result a dog can not walk normally.This condition is quiet painful for a dog and needs surgery in severe cases.

SPINA BIFIDA:
In this disease the neural tube that that connects the spinal cord to nervous system is unable to close completely.The most seen symptoms in cats suffering from Spina Bifida are inconvenience and urine leakage.

HEAT STROKE:
English Bulldogs are sensitive to hot and cold temperatures and are prone to heat stroke.This can cause sudden death during exercise.Their small nostrils do not provide enough space for the air to pass to fulfill body's oxygen requirement during high activity times that causes body temperature to rise and as a result the dog suffers from heat stroke.One should keep enough water and other equipment to keep his dog cool and exercise should be done in smaller sessions in order to prevent over heating.

CHEYLETIELLA DERMITIS:
This is a skin disorder caused by a mite named Cheyletiella that lives in the outer layer of skin.If you see too much your pet having too much dandruff or scratching excessively near ears or specifically at back then there are chances that he might be suffering from Cheyletiella Dermatitis.Your dog may lose hair at a specific part of his coat and you would be able to see their skin become reddened.This disease is also called Walking dandruff as you would be able to see mites moving in hairs.If there are no mites present but your dog is still scratching excessively then he might be suffering from some other skin disorders.

YEAST INFECTION:
You dog may suffer from from any ear or skin infection due to less grooming or due to living in uncleaned environment.Excessive scratching of year is one of the main symptoms of ear yeast infection.This can produce a bad odor if not timely cured.The infection is actually because of the rapid growth of fungus.Yeast infection is most commonly diagnosed by vet by process called Cytology.

DISTICHIASIS:
This disease appears due to the abnormal growth of eyelashes.Affected eyelid would become red because of excessive rubbing by your dog.Eyelashes rubbing with eye surface would cause excessive tearing and as a result eyelids may swell which eventually affects dog's eyesight.
ENTROPION:

This is also an eyelid disorder.This is a genetic disorder that makes the eyelids to move inward.Eyelids rubbing over the surface of eye produces friction,excessive tearing and also makes the dog to scratch eyes.In severe cases it can cause retinal ulcers and as a result loss of vision.

CARDIOMYOPATHY:
English Bulldogs have tendency to develop Hypoertrophic Cardiomyopathy.This particular heart disease affects cats as well as dogs.This disease is caused by thickening of the inner heart muscle that prevents the normal blood flow and affect the working of heart.This disease can also appear in early days of puppyhood and can cause immature death.A puppy needs a yearly scan to keep it confirmed that it is not suffering from HCM.

BLOAT:
This disease appears due to the excess of gas in stomach and can cause death in severe cases.This disease is commonly known a as bloat.When the pressure in the abdomen increase to an abnormal extent the stomach twists and a dog your dog is not able to vomit and tries to find a suitable posture to reduce the pain.The disease may also cause a specific organ death in your dog.

CANINE CANCER:
Cancer is the most leading disease disorder that causes most deaths in dogs every year.Cancer is a numerous division of body cells and can appear in any age but have been seen mostly in old dogs.The cancer is cureable in it's early stages but one should be aware of it's symptoms to nip it from the bud.Almost 35% of all dogs die with cancer.Common symptoms of Canine Cancer are as follows.

ELONGATED SOFT PALATE:
As the name shows this disease occurs due to the elongation in soft plate. This disturbs the airway and it becomes difficult for a dog to inhale air easily.Dogs suffering from this disease specially feel disturbance while eating.Common symptoms of this disease are open mouth breathing,excessive production of saliva and snoring.After being diagnosed this disease can be cured by a surgery.

With all the diseases described above English Bulldogs have also been seen prone to Cleft Palate,Heart Murmur and Bladder stones.
Image Source:worldofbulldog