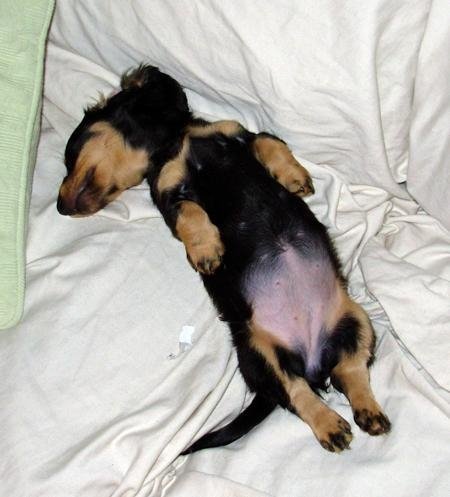 Every dog breed is prone to some specific diseases.Dachshund is generally a healthy dog breed but there are some diseases that have been seen affecting Dachshunds more than other dog breeds.An owner should be aware of these to prevent any kind of serious damage.Mostly diseases appear in small age in hounds and that is why a puppy needs more care and timely checkup.

OBESITY:
Dachshunds are from Hound group and need sufficient amount of exercise that is not usually provided them by their owners.They are often kept in small apartments that are not enough to fulfil their the level of activity they need.Obesity is a root of many other health problems and leads to many fatal diseases.One must be sure that he is providing his Dachshund with enough space and exercise time that he needs to prevent Obesity.

EPILEPSY:
This is a seizure disorder that appears in two forms including Idiopathic and acquired.In this disease most of the dogs show abnormal behavior like snatching or attacking.A dog may use as much force as it has to get anything.Your dog may run if set free suffering from Epilepsy.Dogs show this abnormal behavior due to the affect in electrical impulses that carries orders from the brain to be performed.

BACK PROBLEMS:
Dachshunds have been seen prone to many spinal diseases.The biggest reason behind this is their odd body shape.Their small legs and long hot dog shaped body puts excessive pressure on back bone that results in problems like CIDD.Obesity can also cause back pain.Biggest symptom for any Spinal disease is difficulty in movement and decrease in activity level.

GASTRIC DILATATION VOLVULUS:
This disease appears due to the excess of gas in stomach and can cause death in severe cases.This disease is commonly known a as bloat.When the pressure in the abdomen increase to an abnormal extent the stomach twists and a dog your dog is not able to vomit and tries to find a suitable posture to reduce the pain.The disease may also cause a specific organ death in your dog.

SYMPTOMS:
Considerable increase in the shine of eye.Partial vision loss.Difficulty to recognize things specially at night.

This is also a skin disorder caused by mites but a bit  more severe than the condition described above.In this disease parasitic mites in a large numbers attacks dog's skin.These eight legged mites lives in hair follicles and makes the skin dry.These mites quickly increases in number and it becomes almost impossible for a dog to resist them.Red patches and hair loss are symptoms of Demodicosis.This disorder is not contiguous and does not cause severe problems in dogs.However you should consult it with vet as it might lead to other serious skin problems.
Image Source:zugeerl

Labels: Dachshund, Dogs
Email ThisBlogThis!Share to TwitterShare to Facebook
at 14:14