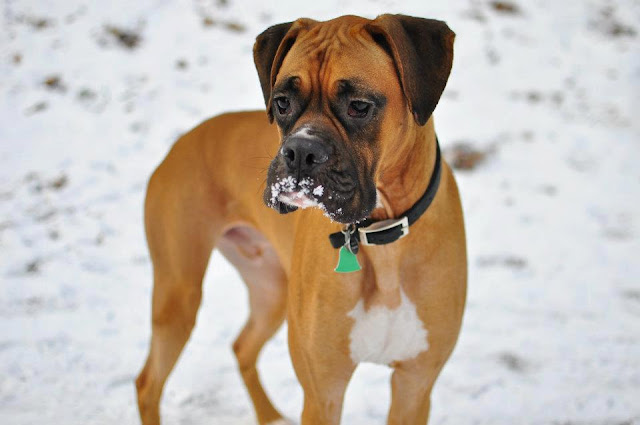 Every dog breed is prone to some specific health disorders.Boxer is generally a health dog breed but have tendency to develop some health disorders.By knowing such disease you can save your dog from the damage before it become inevitable.Here are some diseases Boxers are prone to.

CANINE CANCER:
Cancer is the most leading disease disorder that causes most deaths in dogs every year.Cancer is a numerous division of body cells and can appear in any age but have been seen mostly in old dogs.The cancer is cureable in it's early stages but one should be aware of it's symptoms to nip it from the bud.Almost 35% of all dogs die with cancer.Common symptoms of Canine Cancer are as follows.

Boxers are prone to some heart disorders.Some of them are as follows.

BOXER CARDIOMYOPATHY:
This is a genetic heart disease that is specific to Boxers and  affects Boxers of all ages.It is also called Arrythmogenic Right Ventricular Cardiomyopathy.In this disease dog suffers from sets of faster heart beats.Which affects pumping of heart and that prevents sufficient blood flow in different parts of body in which brain gets badly affected.The disease can cause sudden death.This disease is hard to diagnose as it shows no early symptoms.

GASTRIC DILATATION VOLVULUS:
This disease appears due to the excess of gas in stomach and can cause death in severe cases.This disease is commonly known a as bloat.When the pressure in the abdomen increase to an abnormal extent the stomach twists and a dog your dog is not able to vomit and tries to find a suitable posture to reduce the pain.The disease may also cause a specific organ death in your dog.

OBESITY:
Boxers are from Working family and need lots of exercise that is not provided them by their owners.They are often kept in small apartments that are not enough to fulfil their the level of activity they need.Obesity is a root of many other health problems and leads to many fatal diseases.One must be sure that he is providing his Boxer with the enough space and exercise time that he needs to prevent Obesity.

CHEYLETIELLA DERMATITIS:
This is a skin disorder caused by a mite named Cheyletiella that lives in the outer layer of skin.If you see too much your pet having too much dandruff or scratching excessively near ears or specifically at back then there are chances that he might be suffering from Cheyletiella Dermatitis.Your dog may lose hair at a specific part of his coat and you would be able to see their skin become reddened.This disease is also called Walking dandruff as you would be able to see mites moving in hairs.If there are no mites present but your dog is still scratching excessively then he might be suffering from some other skin disorders.
Image Source:befreckled

Labels: Boxer, Dogs
Email ThisBlogThis!Share to TwitterShare to Facebook
at 05:21