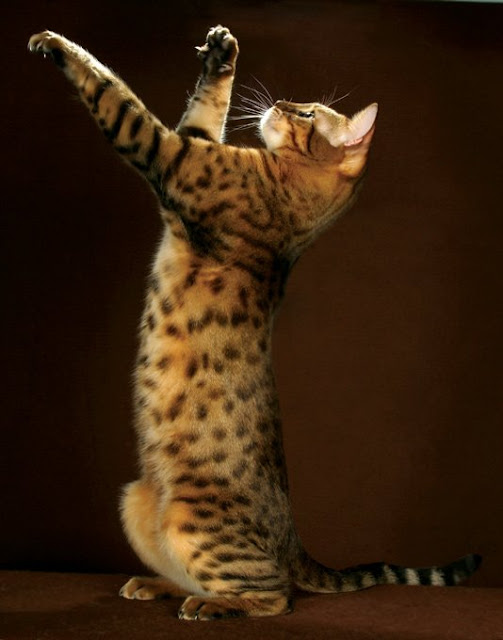 Bengal cats are healthy and active but like other cat breeds they are also prone to some health diseases.Here are some disease explained which Bengal cats are prone to

HYPERTROPHIC CARDIOMYOPATHY:
Bengal cats have tendency to develop Hypertrophic Cardiomyopathy.This particular heart disease affects almost all members of feline world.This disease is caused by thickening of the inner heart muscle that prevents the normal blood flow and affect the working of heart.This disease can also appear in early days of kitten and can cause immature death.A cat needs a yearly scan to keep it confirmed that it is not suffering from HCM.Hereditary Myopathy is also common in Bengal cats.It is genetic disorderliness and a neurological disease.It causes muscle disorder and makes the cat so weak that the would not be able to move to even a small distance.

PROGRESSIVE RETINAL ATROPHY:
It is an inherited disorder of the retina of the eye usually given resemblance to film used in camera.This disease does not occur at a specific age and  the cat suffering from this does not feel any pain.However the disease usually occurs in both of the eyes and gradually makes the dog completely blind.Bengal cats have been seen more prone to Progressive Retinal Atrophy than many other cat breeds
DIAGNOSIS:
considerable increase in the shine of eye.Partial vision loss.Difficulty to recognize things specially at night.

Cataracts:
This is also an eye disorder.This disease appears in the lens of the eye that an eye use to focus.In this disease the eye lens loses it's transparency and makes blurred images.In worse cases the whole vision becomes unclear.This actually happens due to the disturbance in significant  amount of water and proteins that are essential for an eye lens to work.


GIARDIASIS:
This disease is caused by a parasite named as Gardia Lambia that lives in small intestine of cats.These parasites acts  just like any other parasite and reproduces in small intestine and can cause severe damage if are numerous.This disease in not contagious so it can not be transferred to other pets or humans by a pet.The exact cause of this disease in unknown however keeping your cats environment clean and keeping an eye on him about where he goes and with which other feline members he meet can be a nice step to prevent the disease.Bengals mostly like water and dirty water can also cause Giardiasis.Inconvenience and diarrhea are the most common causes of Giardiasis.

COCCIDIOSIS:
This is also an infection caused microscopic single-celled organisms lives in small intestines of cats and dogs and are collectively named as Coccidia.This is an contagious infection and has been seen more in kittens having age around 4-10 weeks.Once you have diagnosed this infection in one your pets then most probably rest of your pets are also having them.This infection may also occur due to change in environment for instance traveling etc.Coccidia has many species out which two species named as Isospora Feris and the other one as Isospora Rivolta.Coccidiosis symptoms includes diarrhea,vomiting,loss of appetite and weakness.
Image Source:hayvanca