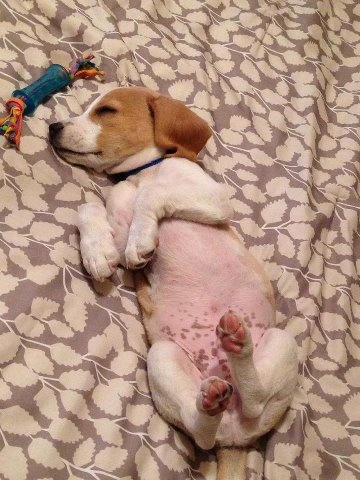 Beagle is a healthy dog breed that has ability to fight with most of diseases present in Canine World.However there are some diseases that have been seen common in Beagles.An owner having knowledge of what diseases are common in Beagles can diagnose it at right time to prevent a serious damage.Here are some common diseases described below

OBESITY:
Beagles are from Scenthound family and need lots of exercise that is not provided them by their owners.They are often kept in small apartments that are not enough to fulfil their the level of activity they need.Obesity is a root of many other health problems and leads to many fatal diseases.One must be sure that he is providing his Beagle with the enough space and exercise time that he needs to prevent Obesity.

HIP DYSPLASIA:
This is an inherited disease most of the dog breeds suffer from.Labrador Retrievers are also prone to Hip Dysplasia.This is a hip joint disorder and mostly occur in dogs in the form of Canine Hip Dysplasia.Actually,a hip joint has two main components a ball and a socket.In this disease the ball and socket in the hip joint does not fit together as a result are no longer able to bear the pressure and cause massive friction in joints.This disease usually appears in the early age of a dog's life.It can badly affect the physical activity of your dog and would gradually make it too weak.
EPILEPSY:
This is a seizure disorder that appears in two forms including Idiopathic and acquired.In this disease most of the dogs show abnormal behavior like snatching or attacking.A dog may use as much force as it has to get anything.Your dog may run if set free suffering from Epilepsy.Dogs show this abnormal behavior due to the affect in electrical impulses that carries orders from the brain to be performed.

DWARFISM:
Dwarfism is also a bone development disorder.In this disease the bones are not developed properly and as a result the dog remains like a 4 month old dog in physical appearance."Osteochondrodysplasia" is a condition of dwarfism that is actually the abnormal development of of both bone and cartilage.
The most important thing is the proper health care and careful and timely vaccination of your pet that can certainly reduce the chances of any disease to occur.

Cherry Eye:
This is an eye disorder in which Nictitating Membrane that is used for eye protection also called as third eyelid get affected.Cherry eye appears as a small red balloon at the cornet of your dog's eye.This usually appears in puppyhood and can be treated or cured.The disease appears when the third eye lid got affected and could not remain at it's original position.That can be because of external eye injury.The balloon appeared is mostly removed cosmetically and rarely needs surgery.

Beagles have also been seen more prone to Bladder stones than most of other dog breeds.One of the most common symptom is the increase in urine production.Bladder stones may occur due to low quality pet food and drinking impure water.

SKIN DISORDERS:
Beagles have tendency to develop several skin disorders or allergies.Symptoms of any skin disease is excessive scratching of ears or hair loss from a specific part of coat.Reddening of skin etc.
Image Source:awwcute

Labels: Beagle, Dogs
Email ThisBlogThis!Share to TwitterShare to Facebook
at 05:39