Manx Cats and Their Tails 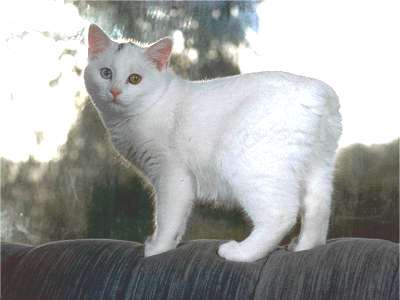 Manx cats are often classified on the basis of their tail lengths.The shorter the tail the better.The reason behind this is the Manx with a shorter or almost no tail is carrying the more gene that makes their tails shorter and therefore would be considered as purebred.They are classified into 4 types on the basis of their tail length.
Rumpy:
These type of Manx are also called dimple rumpy and do not have any tail.These are considered to be the most precious type in Manx cats but also causes some problems.
Click here to see
Riser Rumpy:
These types of Manx cats do have tails but almost comprising 15 % of a normal cats tail.It can also be said that they have a tails root but not an actual tail.
Stumpy:
Manx cats with tails almost comprising 50% of a normals cat's tail are called stumpy.

Normal Tail:
Some Manx cats have normal completely developed tail and are not different than a normal cat in appearance.They are called long or normal tail Manx cats.
Image Source:animalku

Labels: Cats, Manx
Email ThisBlogThis!Share to TwitterShare to Facebook
at 12:41