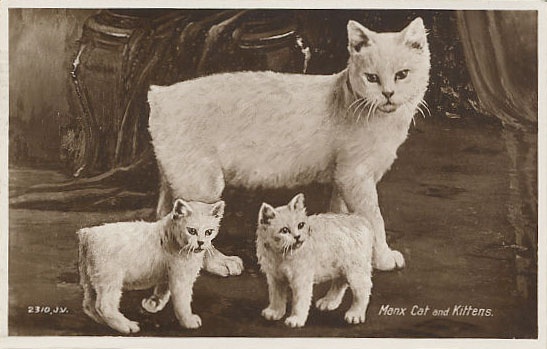 Manx is a domestic cat breed with it's origin on an island between English and Irish shores names as Isle or Man.Some of these cats have small tails while others are tailless.There are a lot of myths present from where these cats were descended and how they have lost their tails.In real this shortening of tail is a result of natural mutation that affected their body type and these cats appeared with a small or no tail.These cats are no doubt the favorite animal from hundreds of year in their origin.Though Manx cats are thought to be existed hundreds of year ago (1588) in Isle of "Man" however in the early 19th century these cats got the attention of cat breeders and associations.In those decades these cats also gain importance in English region.They became one of the most important members of cat shows after the first cat show held in London at Crystal Palace in 1871.Manx also got the CFA recognition in early 19th century and were also exported to American in those decades.Though these cats are not numerous in American but are certainly known for their unique look and characteristics.Due to the popularity in their origin "Isle of Man" ruled by "Queen Elizabeth II" Manx cat pictures were placed on national currency coins in 1988.

Labels: Cats, Manx
Email ThisBlogThis!Share to TwitterShare to Facebook
at 06:51