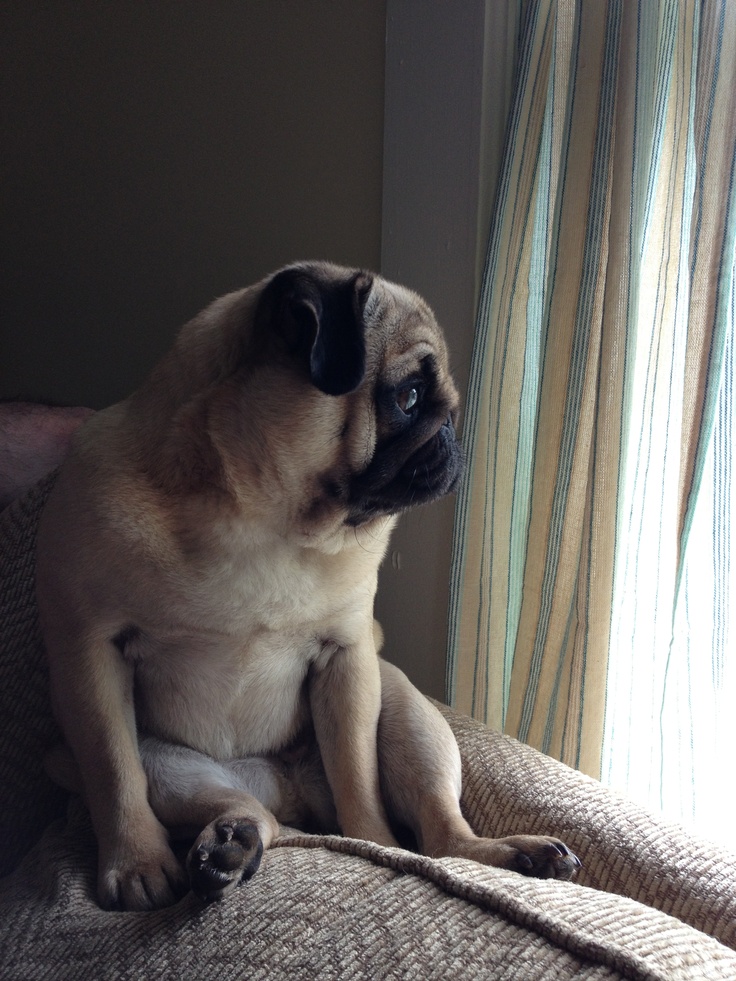 Pugs are considered more prone to diseases than most of other dog breeds of Canine world.Pugs mostly suffer from skin diseases and are also prone to eye infections.Pugs have also been seen suffering from breathing disorders.Here are some health diseases from which Pugs usually suffer and an owner should be aware of these in order to save his dog before the time passes.
HIP DYSPLASIA:
This is an inherited disease most of the dog breeds suffer from.Pugs are also prone to Hip Dysplasia.This is a hip joint disorder also occurs in human beings.In dogs it is called Canine Hip Dysplasia.Actually,a hip joint has two main components a ball and a socket.In this disease the ball and socket in the hip joint does not fit together as a result are no longer able to bear the pressure and cause massive friction in joints.This disease usually appears in the early age of a dog's life.It can badly affect the physical activity of your dog and would gradually make him weaker.
DIAGNOSIS:
A hip anatomy can be useful in confirming that whether your dog is suffering from Hip Dysplasia or not.
ELBOW DYSPLASIA:
This is not very much different from Hip Dysplasia discussed above.Male Pugs has been seen more prone to this disease than female Pugs.This disease also appears in the early ages of your puppy almost at the age of four month.This is also a genetic disorder and most of the dogs having this suffer from this disease throughout the whole life.
In this disease during the period of bone development the elbows do not develop properly or develops in an abnormal way that later on prevents the right movement of elbow joint.

EPILEPSY:
This is a seizure disorder that appears in two forms including Idiopathic and acquired.In this disease most of the dogs show abnormal behavior like snatching or attacking.A dog may use as much force as it has to get anything.Your dog may run if set free suffering from Epilepsy.Dogs show this abnormal behavior due to the affect in electrical impulses that carries orders from the brain to be performed.
LUXATING PATELLA:
This disease is more common in toy breeds.This is a bone disorder present in knee also called trick knee.In this disease the small triangular bone called patella which normally protects the knee joints is displaced from it's original position.The ligaments present in knee joint become unable to perform their function and as a result a dog can not walk normally.This condition is quiet painful for a dog and needs surgery in severe cases.

CHEYLETIELLA DERMATITIS:
This is a skin disorder caused by a mite named Cheyletiella that lives in the outer layer of skin.If you see too much your pet having too much dandruff or scratching excessively near ears or specifically at back then there are chances that he might be suffering from Cheyletiella Dermatitis.Your dog may lose hair at a specific part of his coat and you would be able to see their skin become reddened.This disease is also called Walking dandruff as you would be able to see mites moving in hairs.If there are no mites present but your dog is still scratching excessively then he might be suffering from some other skin disorders.
DEMODICOSIS:
This is also a skin disorder caused by mites but a bit  more severe than the condition described above.In this disease parasitic mites in a large numbers attacks dog's skin.These eight legged mites lives in hair follicles and makes the skin dry.These mites quickly increases in number and it becomes almost impossible for a dog to resist them.Red patches and hair loss are symptoms of Demodicosis.This disorder is not contiguous and does not cause severe problems in dogs.However you should consult it with vet as it might lead to other serious skin problems.
EYE DISORDERS:
Pugs have big and sensitive eyes and are prone to some eye disorders including Proptosis,eye ulcers,Distichiasis and Progressive Retinal Atrophy.

PROGRESSIVE RETINAL ATROPHY:
It is an inherited disorder of the retina of the eye usually given resemblance to film used in camera.This disease does not occur at a specific age and   the dog suffering from this does not feel any pain.However the disease usually occurs in both of the eyes and gradually makes the dog completely blind.Almost all dog breeds has been seen suffering from this disease.
SYMPTOMS:
considerable increase in the shine of eye.Partial vision loss.Difficulty to recognize things specially at night.
PROPTOSIS:
This is an eye displacement disorder.In this condition the eye moves forward from behind the eyelids that badly affects dog's vision.This disease mostly occurs due to any kind of head or neck injury that increases the pressure in these areas and causes they big eye balls in Pugs to move forward.This disease is rare in dogs having eyes covered with hairs and thick skin.Pugs are more prone to this disease because of their big sensitive eyes.

DISTICHIASIS:
This disease appears due to the abnormal growth of eyelashes.Affected eyelid would become red because of excessive rubbing by your dog.Eyelashes rubbing with eye surface would cause excessive tearing and as a result eyelids may swell which eventually affects dog's eyesight.
KERATOCONJUNCTIVITIS SICCA.
This disease mostly named as Dry Eye have also been seen in Pugs.This is an tear gland disorder.In this disease tear glands produce tears containing more mucus and less water.As a result the eyes become dry and friction takes place between eyelids and eye surface.In severe cases mucus covers the outer layer of eye and causes partial or complete vision loss.
ENTROPION:
This is also an eyelid disorder.This is a genetic disorder that makes the eyelids to move inward.Eyelids rubbing over the surface of eye produces friction,excessive tearing and also makes the dog to scratch eyes.In severe cases it can cause retinal ulcers and as a result loss of vision.
STENOTIC NARES:
This is a nasal disorder.Dogs having small noses have been seen suffering more from Stenotic Nares.In this disease a dog is unable to breath from nostrils and has to breath from mouth.This disease results in uncomfortable sleeps.The disease occurs due to the abnormality of cartilage tissues present in nose.Noisy breaths are one of the main symptoms of Stenotic Nares.
ELONGATED SOFT PALATE:
As the name shows this disease occurs due to the elongation in soft plate. This disturbs the airway and it becomes difficult for a dog to inhale air easily.Dogs suffering from this disease specially feel disturbance while eating.Common symptoms of this disease are open mouth breathing,excessive production of saliva and snoring.After being diagnosed this disease can be cured by a surgery.

Labels: Dogs, Pugs
Email ThisBlogThis!Share to TwitterShare to Facebook
at 13:40