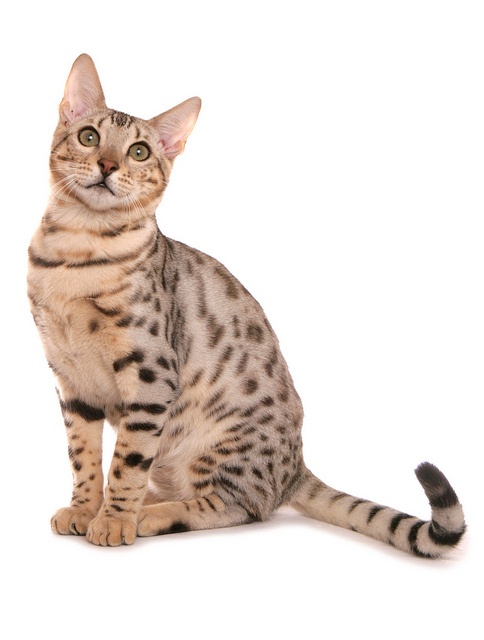 Bengal Cat is a hybrid cat breed that is a result of cross breeding between Asian Leopard cat and domestic south Asian cat breeds.Modern Bengal cats are thought to be descended from three different generation of Bengal cats.All these generations were produced by cross between Leopard cat and domestic cats in different times.One of the oldest record of these hybrid cats can be seen in Harrison Weir's (Father of Cat Fancy) book on cat breeds.One of the most important name in History of Bengal Cat is Dr.Willard Centerwall who worked who took interest in breeding Asian Leopard cats to domestics cats and made him an important topic of his research and studies.His research and breeding of these cats several times served as a milestone in survival of Bengal cats.After Dr.Willard Jean Mill took several hybrid cats from him and latter she bred them to produced a specific coat pattern that she wanted.
In the same decade two breeders name Greg and Elizabeth started breeding Asian Leopard cats to Egyptian Mau cats who are thought to be descended from African Wild cats.They were succeeded in producing litters similar to what Dr.Willard had.However most of the male Bengals produced in those days were unable to fertilize.
In early 1970s Bengal Cats gained attention of breeders in USA and their breeding if these cats took a new turn.Bengal cats are now recognized by TICA and also several other cat registering organizations.After the their third generation Bengal cats got the championship status and were started to be used as an affectionate house pet.
Image Source:flickr