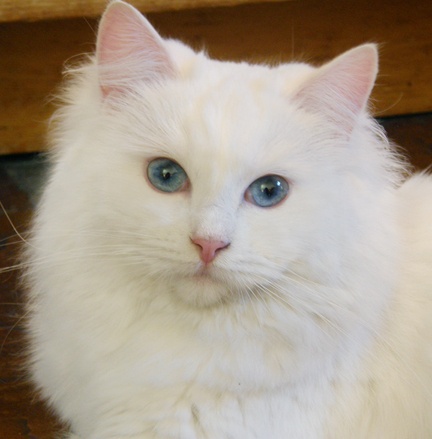 Albinism is disease caused by absence of a particular pigment that defines skin and hair colors.But there is a difference between Albinism and being white like not all pure white cats are Albino.In cats suffering from Albinism the eye color is also not defined whereas the cats only having white colored coat have been seen mostly with odd eyes.However this is a misconception that all white cats are deaf.Some white cats are perfectly normal as no sign for deafness has been seen in them.Some white cats having odd colored eyes have been seen suffering from deafness.Cats having blue eyes or having one blue eye have are more prone to deafness.It is not necessary that a deaf cat would be deaf by both sides.A cat may suffer from unilateral or bilateral deafness.However the blue eye side has been seen more affected with deafness.Mostly cats suffer from Non-Syndromic hearing loss which means there is no other defect present in them but deafness.Such cats would do well if are kept indoor.Here are some results after research about the percentage of white cats being deaf.

Researchers found that only 17 to 22 percent of white cats with non-blue eyes are born deaf. The percentage rises to 40 percent if the cat has one blue eye, while upwards of 65 to 85 percent of all-white cats with both eyes blue are deaf. Some of these cats are deaf in only one ear. Interestingly, if a white cat with one blue eye is deaf in only one ear, that ear will invariably be on the same side of the head as the blue eye.
Source Link