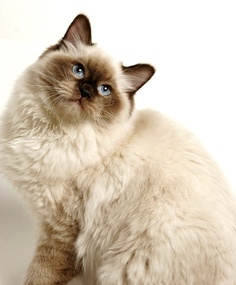 Ragdolls are thought to be originated from California,USA.Ragdoll is a new breed of cat and it's history date back to 1960s.Ann Baker is considered as a first breeder to be successful in producing this cat breed.A mixedbred Persian cat named Josephine is considered to have first Ragdolls in her litter.Josephine had kittens from many males of different breeds.Ann Baker claimed that after getting injured in a car accident when Josephine was taken to hospital and got the treatment.After that treatment Josephine quickly recovered and it was due to that accident that the next litter she had was all with different coat colors and blue eyes like today's Ragdolls.However,later she started claiming that Ragdolls have human genes in them due to which many breeders opposed her.She was well paid for the first Ragdoll kittens she had from Josephine.After that other breeders started breeding Rag dolls and this breed spread around the world more quickly than any other cat breed.In 1967 Ragdoll was first registered in USA as a separate cat breed.In the early 1970s this breed was transferred to United Kingdom by a pair of Ragdolls which caused the spreading of this breed there.

Labels: Cats, Ragdoll
Email ThisBlogThis!Share to TwitterShare to Facebook
at 09:01