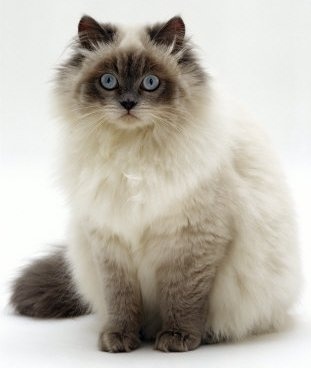 Birman cats are considered to have an origin in Burma.They are also called"sacred cat of Burma"The actual background of Birman Cats is still unknown.However,there are some myths that are thought be true like they belong from a group of cats having white coat and yellow eyes and long haired tails.they were thought to live in a temple whose guardian was Lao-Tsun.That temple is thought to be located at the eastern side of famous lake Incaougji.Lao -Tsun used to pray in that temple by having a blue colored eye cat on his left side.One day while praying the Siamese invaders have attacked his temple and have killed the priest.In this accident the cats fur turned to black color and her eye color also changed.
Birmans first came to Europe in early 20th century.After the 2nd World war Birmans were almost finished from Europe and only two of them left there.After that those cats were carefully and excessively bred with other cat breeds like Persians.Birmans first arrived to USA in 1860s.
Image Source:allposters